Trump’s measures hamper scientific collaboration between Cuba and the U.S.

Recent steps taken by the Trump administration to reinforce the blockade, limit travel, and control trade between Cuba and the States, have left an unexpected victim: the boom in scientific collaboration between the two countries that followed the December 17, 2014 decision to move toward normalizing relations.

Although the new regulations do not specifically target science, and travel licenses for academic purposes are still available, a «toxic atmosphere» exists, generating «uncertainty» around cooperation, according to an article in the highly respected magazine Science.

U.S. scientists are making fewer trips to Cuba, and their Cuban colleagues are traveling less often in the opposite direction, since the U.S. embassy in Havana is no longer processing the necessary visas, which means an additional trip to a third country, the publication added.

The impact of Trump’s policy constitutes a dissuasive factor for many specialists interested in Cuba’s scientific work.

At the beginning of November, the U.S. Departments of Treasury, Commerce, and State announced that regulations would go into effect regarding the kinds of activities in which U.S. citizens could engage during their visits to Cuba, going as far as listing the brands of soft drinks they could consume.

At the same time, a travel advisory was issued, citing the unfounded argument that visitors from the U.S. could suffer sonic attacks like those allegedly experienced by personnel at the U.S. embassy in Havana. No concrete evidence or scientific explanation exists to support the occurrence of such incidents, and none of the four million tourists, who visited the island this year, reported any such experiences or problems with their hearing.

As an example of the negative effect of Trump’s measures, the magazine cited a conference scheduled for early December at Cuba’s Pedro Kourí Institute of Tropical Medicine (IPK), which U.S. collaborators were planning to attend, noting that «all but one» have changed their minds.

«And two researchers with the U.S. Centers for Disease Control and Prevention (CDC) told IPK they had to pull out because agency officials forbade them from traveling to Cuba,» the Science article states.

The government is actively limiting collaboration. The article reports that four grants awarded to the IPK last year by the U.S. National Institutes of Health to study arboviruses such as Zika, chikungunya and dengue, have been «put on hold.»

Gail Reed, founder of the organization Medical Education Cooperation with Cuba, commented to Granma International, «Health knows no borders; nor do diseases.»

Reed pointed out that the mosquito species that spreads Zika and dengue is present in 75% of U.S. territory, adding, «The fullest knowledge about these viruses is to be found in Cuba, at the IPK, which has collaborated with the World and Pan American Health Organizations.»

According to Reed, the steps taken by Trump not only show a «lack of common sense,» but also «a lack of concern for the health of U.S. citizens themselves,» by not allowing scientists to exchange experiences with their Cuban counterparts.

Some have decided to sort things out on their own. CBS reported the story of

George Keays, from the state of Colorado, who traveled to Cuba seeking treatment for lung cancer with monoclonal antibodies, a leading area of investigation in the country.

«The Cuban people are wonderful, their medical system is off the charts. I was very impressed,» Keays said, explaining that the treatment does not cure the disease but limits the growth of tumors.

Keays, who will need to continue his treatment next year, is aware that he could face new political barriers, «I am working on a study of new travel regulations,” he said; he’ll go through Mexico if need be, adding, «You do what you have to do.» During the Obama administration, Cuba and the U.S. reached an agreement to conduct clinical trials at the Roswell Park Cancer Institute in New York, of a novel injectable medication for lung cancer patients developed here.

Also under consideration was the possibility of distributing in the U.S. Cuba’s Heberprot-P – the most effective treatment for diabetic foot ulcers in the world, that could prevent amputations faced by thousands of U.S. patients every year.

Despite the currently tense climate between the two countries, several collaborative projects continue to move forward.

The steps forward over the last three years and the longstanding tradition of collaboration between Cuban and U.S. scientists show that both parties can benefit from the exchange of experiences, despite political differences. 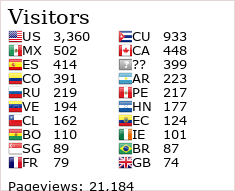